There is a particular route which I commonly take to go home at night. It takes me through an underpass beneath a busy triple-carriageway, then past a bus stop on the other side of the road. At the bus stop there’s a shelter and a round black rubbish bin made of rugged plastic. As I said, this is a very busy, noisy road, and the pavement runs alongside a high brick embankment which form the back wall of a row of garages and a barrier to the housing blocks behind. The embankment is topped by wild looking shrubs and undergrowth which, along with the noise and wind and smells of the speeding vehicles, help to lend the place a certain feeling of desolation… or maybe that’s just my mood as I rush to catch the last bus, fretting about the amount of work which hasn’t been done yet.

One night I walked past the bus stop and saw that the rubbish bin has been burned, melted down, leaving a big black pancake of congealed plastic on the pavement.

A few days later when I walked by, I saw that someone had placed a tied-up supermarket carrier bag full of rubbish on top of the congealed pancake which used to be the rubbish bin, and it seemed rather poignant to me. I award the second B. S. Art Prize to that person.

Once again, this prize is awarded to an anonymous person, therefore the prize money will be invested in funding future awards and the medal will be kept in the BSAP archive. I’m really not sure whether or not I regret neglecting to take a photo. 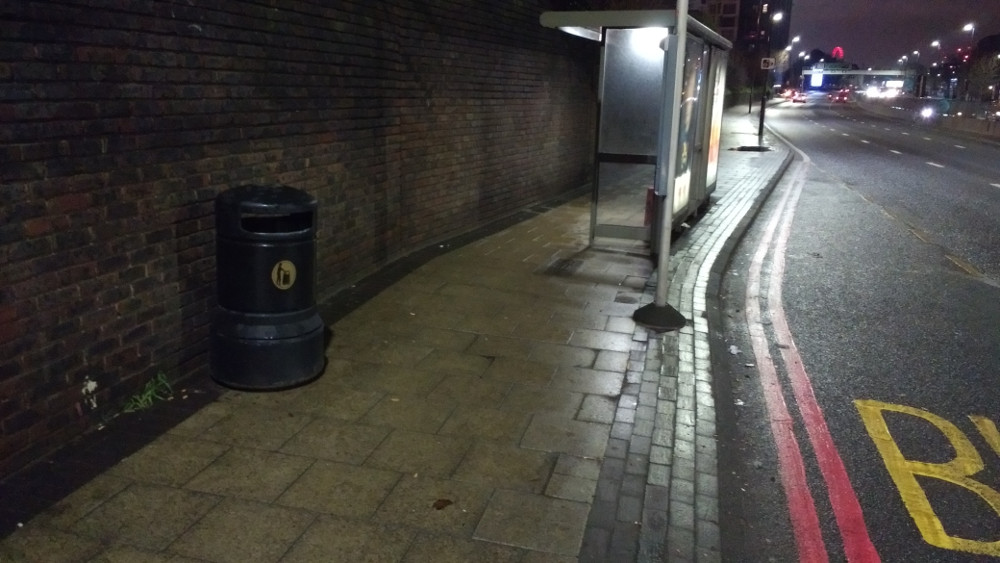 After cleanup – no trace remains